You are here: Home » Assessment & Control of Microbial Contamination

A Guide to Microbial Testing:  Microbial Control vs Microbial Elimination

In antimicrobial systems or microbiology testing, confusion arises when a particular system is being evaluated since the acceptable concentration of microorganisms for any particular process can differ.  In a given system, acceptable microbial concentrations can range from <10 colony forming units per ml (CFU/ml) to as high as 10^4 CFU/ml (that’s the equivalent of 10,000 bacteria in a gram of water).  The purpose of the microbial test is to determine the answer to the question: When is the concentration of microorganisms likely to cause either a QC or safety problem?  On average, a stable system with less than 10^3 CFU/ml is deemed in control and 10^5 CFU/ml or higher is deemed out of control and in need of an antimicrobial solution.

It’s important to acknowledge, that in most systems, the aim of a microbial control strategy is not sterility.  Rather, the aim is to balance microbial control acceptability with cost, safety, and quality.  At times, simply impeding the growth of microorganisms and monitoring them system using an appropriate microbial test can be a better, more cost effective strategy than outright elimination through over use of an antibacterial, or antifungal additive or combinations of antimicrobials with other interventions.

The factors that contribute to an otherwise acceptable level of bacterial and fungal contamination vary considerably.  For raw materials,  fuel, oil, or lubrication systems, common examples of issue points are:

In all systems, these factors favor increased growth of bacteria and fungi, which in turn results in faster deterioration of the fluid or product and will require additional amount of antimicrobials.

Much like artificial coral reefs, metal swarf and agglomerated materials provide a tremendous surface area and a safe reservoir of aging materials that will more readily support organism growth.  These microorganisms can readily adapt to harsh environmental conditions by forming biofilms that, once established, can only be removed by mechanical means.

Some fluid systems may appear safe from bacteria and fungi due to a lack of water, but whether by condensation, fractionation from a supply, or simply contamination, water can accumulate and build into large stagnant pools (Rule of 3).  These pools may lack oxygen, but oxygen is not a requirement for growth of anaerobic (non-oxygen requiring) bacteria, which in addition to the degradation of the solution, can cause metallic surface pitting, corrosion, and weakening of a long-lived metallic structures or materials.

Therefore, the implemented control strategy needs to include assessment and management with these types of system issues in mind.

Tools for Contamination Assessment – There is no shortage of appropriate tools for assessing microbial contamination of a system.  These include numerous bacteria and fungi test kits and ASTM, NSF, or ISO test methods.  The challenge is in knowing which tools are appropriate for a specific system. The process being monitored could be a fluid sump, fractionation fluid tank, oil or grease reservoir, the lid on a tank, or piping to and from a particular system. Key elements are to know where to pull samples to get the best representation of the bacteria and fungi from the system, including where the void volumes are and where biofilms are likely to be established.

Once we know where  to test for the bacteria and fungi, we need to determine when these samplings need to be made.  The measurements must be designed to monitor change over time to establish trends.  Lacking microorganism trend data, single data points do little to support controlled management of a system.  Appropriate bacterial and fungal measurement times can be from twice daily to weekly.  As a guideline, higher temperatures (above 70°F) and low overall systems stability need more frequent measurements.

Ideally, the metric used will also identify the category and quantity of contaminating bacteria and fungi  present.  We predominantly discuss bacteria and fungi as they are the two most common categories of organisms, but algae can also play a role in systems that have a high proportion of water and are exposed to sun light.  Importantly, as organisms become established, they facilitate what is known as succession or increased acclimation of the system to other organisms, making deterioration faster and control of the system more difficult.

Common tools used in the assessment of organisms:

Critically, familiarity with the microbial testing and their measurements, and what they actually mean for a given system can vary tremendously.  Correct interpretation of the microbial test is the most critical function in using any assessment tool.  Fundamentally, there is no reason to select one microbial test type over another as long as the measurements and evaluation are done with a critical eye to a fit with the needs of the process.

ASTM antifungal and antibacterial test methods exist for most systems, and there is considerable overlap between ASTM, ISO and other globally available microbial test standards.  Adaptation of an official method or a modified method that best fits the testing needs of your facility or product types is the best way to introduce a microbial quality controls systems that can best serve your needs.

Thank you for your feedback! It has been successfully sent to Situ Biosciences.

An email confirmation has been sent to the address provided. If you do not receive this email, you can contact us at info@situtest.com to request confirmation.

A response should be provided within 3 business days. 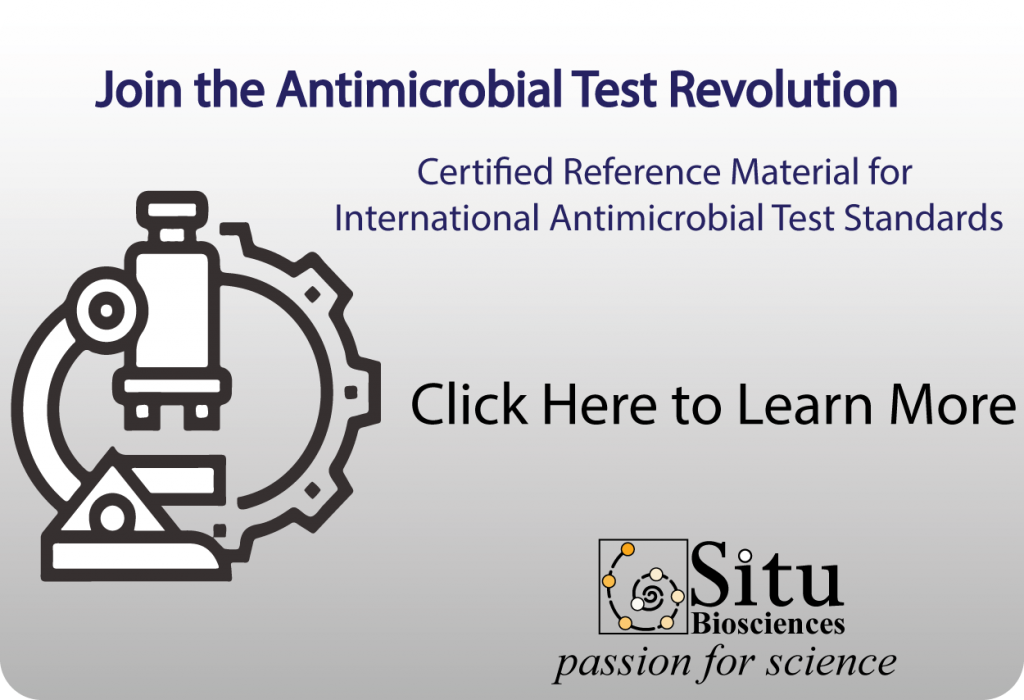